The Conference Board argues that Chinese official data should be taken with some skepticism. Nothing new there. They have adopted a new measure, which suggests that implies “Chinese economic growth at a more realistic 3.7 percent” for the recent past. In this scenario, interestingly enough, “it’s likely that the bulk of China’s slowdown has already taken place since 2011, even if unapparent in official statistics.” So the picture is probably worse than the official one (from The Economist) 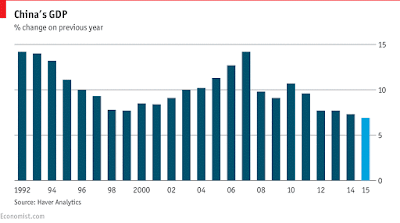 So China will grow at about 4% and has already been growing at that pace for a while, if one believes the Conference Board (in the official data above one might think there is more space for a slowdown, but clearly it has gone already down too). The big questions are whether this will continue, and what would be the impact for the global economy.

Arguably the slowdown is the result of the transition from an export-led development strategy to a domestic, consumption centered economy, compounded by the problems of an unregulated banking sector, the infamous shadow banks. Note, however, that most problems are associated to domestic demand, and debt in domestic currency. China still has current account surpluses and huge external reserves, even if the latter have decreased. So the problems of a typical developing country, which cannot grow given the external constraint are inexistent. Also, it is true that some firms have debts in dollars, and the depreciation of the yuan poses problems, but again the People’s Bank of China has enough dollars that rescuing and absorbing the costs of exchange rate risk should be a minor issue. This is not to say that a further slowdown is impossible, but if it continues it should be counted as a policy mistake, not a structural constraint.

On the effects on the world economy my impression is that there is also a great deal of exaggeration. China is the second largest economy in the world, for sure, and has become central for the global economy in many ways. But it’s role in the global economic problems has been overstated. In Brazil, for example, the Chinese slowdown played virtually no role, as I discussedhere. In the US the usual complaint is that the depreciation of the yuan is behind deindustrialization, and that the Chinese crisis, that has led to a more depreciated currency, is hurting the manufacturing recovery in the country. I am skeptical of the argument. The figure below shows manufacturing employment and a broad trade weighted exchange rate for the US. 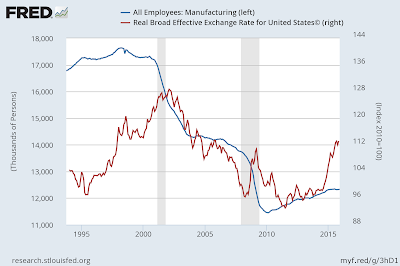 As it can be seen the decrease in manufacturing jobs, which started in the early 2000s (before that it was more or less constant; see discussion here) is connected to the entry of China in the World Trade Organization (WTO). But the collapse of manufacturing jobs went hand in hand with a depreciation of the dollar. And some of the, admittedly slow and small, recovery since the 2008 recession has gone with an appreciation of the dollar. This indicates that Free Trade Agreements (FTAs) and the WTO play a more important role than exchange rates.

China is important, but the notion that it will derail the US recovery seems incredibly hyperbolic. My bet is the US will continue its slow recovery, and the Fed will increase interest rates at an even slower pace than they suggested, as the last meeting indicated.