Later this month, the governing body of the International Labour Organisation is due to elect a new director-general. This election has not received as much attention as the recent appointments of other institutions like the IMF and the World Bank. Even so, it could have important consequences for the world and most of its population. The candidacy of Jomo Kwame Sundaram represents an important chance for the ILO to move to centre stage in developing strategies to counter the global turbulence and move towards more stable, equitable and democratic paths. 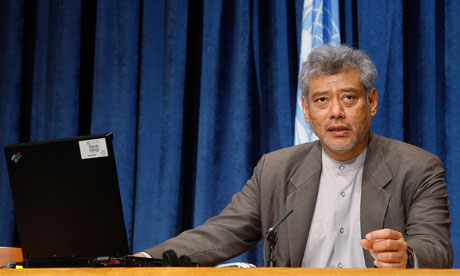 The past two decades have not been particularly kind to workers almost anywhere in the world. As corporate capital has become much more mobile, it has been able to shift bargaining power in its favour to a significant extent. The threat of capital mobility has restrained wages and other demands for workers’ rights, as fear of unemployment has become an ever-stronger disciplining force on labour.

Workers in the global north have felt threatened by actual and perceived competition from those in developing countries who work for much lower wages and in much worse conditions. Meanwhile, the workers in poorer countries have been prevented from seeking to improve their own conditions by the possibility of losing their jobs to the millions of other workers available if capital shifts location. Quite often, actual movement has not been necessary to make this threat effective: just the sheer possibility of capital moving elsewhere, where workers are more “pliable” and less “demanding”, makes it harder for workers even to insist on their legal rights in that country.

In most cases, this process has been accentuated by changing patterns of state involvement. Governments – themselves facing the disciplining power of capital markets – have been reluctant to emphasise workers’ rights and fiscal pressures have led them to cut back on public provision of essential goods and services, even as they have had to bend over backwards to create conditions that make their economies “attractive” to private investors.

There is growing evidence that this strategy of profit-led global accumulation has run its course. It is not only that the recurrent and prolonged financial crises continue to wreak havoc with real economies across the world. It is also becoming clear that trajectories of economic expansion that suppress the purchasing power of most of the people, or enable it only through the expansion of debt, are unsustainable. The social contract that enabled such a trajectory for more than two decades is breaking down: consider the recent political transitions in Latin America, the Arab Spring, the convulsions in Europe.

So a new social compact is required, not just within nations but internationally. For economies across the world to be on viable and sustainable paths of growth, they must be based more on inclusion, which means greater concern for the expansion, stability and conditions of employment and respect for employment rights. This obviously requires new thinking. The good news is that to some extent this is already happening, in several areas of the developing world through governments and social movements, and in public responses in the developed world.

We are in a time when some international institutions can play a more significant role in creating and forging genuinely viable alternative economic trajectories. In fact, the International Labour Organisation is uniquely positioned among the multilateral organisations to play an extremely important role in forging a global consensus around such viable alternatives. Its unusual tripartite structure (with representation on the board from governments, workers’ organisations and employers’ organisations) allows it to become not just a forum for discussions on such matters but a platform for proposing and promoting strategies of economic justice that are both productive and socially acceptable.

That is why the leadership of the ILO is a crucial issue for the global community. The ILO must be led by someone who understands the complex issues around global finance and real economic policies, has ideas about how to address the concerns of both developing and developed countries, and is familiar with the complexities of future problems like climate change and demographic changes.

Fortunately, there is such a candidate among the nine who have put themselves forward for the elections on 27 May at the ILO’s governing body meeting. Jomo Kwame Sundaram from Malaysia is currently the UN assistant secretary-general for economic and social affairs. He is also a widely acclaimed economist whose publications are respected across the world, and a policy adviser who has addressed macroeconomic issues and development issues in many countries.

All these features will be vital if the ILO is to move beyond “business as usual” to take on contemporary challenges and play a productive role. Jomo’s vision, experience and commitment make him ideally suited to take the ILO forward, adapt it to the rapidly changing times and allow it fulfil the role that is so badly needed in the world today.

His election would be desirable from another perspective as well. He is from a developing country, and is extremely familiar with the concerns of both emerging markets and least developed countries.

We have just been through two processes of choosing heads for two global institutions (the IMF and the World Bank), which were effectively reduced to charades in which the north – or rather the US and Europe together – succeeded in pushing through their own candidates.

If most people in the world are to be represented in such global organisations, the leadership should also reflect this through geographical origin. This is not just of symbolic importance: it is going to be much harder to achieve any global consensus when the vast majority of countries consider the dice to be so loaded.

In the case of the ILO, the best and potentially most effective candidate – Jomo – is from a developing country. Surely, in this election, we can hope that the result will be different?

This piece was originally published by The Guardian.

The Triple Crisis blog invites your comments. Please share your thoughts below.